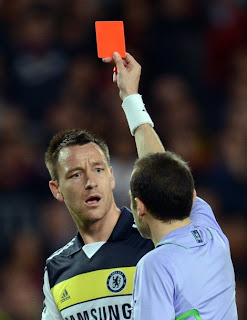 
Hi Reader, you mythical beast, I have a confession to make.  I have a problem and it’s starting to affect my day to day life. It’s John Terry, and the problem is that he exists…no, wait, no, that’s not what I meant to say. What I meant to say is I have a problem in that every time I sit down to write I end up talking about how much I hate John  Terry, just look back at all of my posts and you will see that the square headed one appears in each. This is really beginning to affect my writing, it’s ruined my unpublished novel about a 19th century Geordie fish wife (all of the pertinent social commentary is undermined by a square headed village idiot type who knees all the main characters in the back every time they try to say something and generally tramps around rutting with fish heads) and it totally spoiled my Grandmother’s 80th birthday card/ Birthday. So, I hereby resolve to give the Terry bashing a rest, I can’t promise not to slag him off again any more than I can promise to stop breathing but I will promise not to mention him in every post.

That being said, I have already mentioned him in this one so here is a bit more Terry bashing….

Another weekend in the bubble, another handshake controversy, because in the bubble a handshake is akin to an implicit peace treaty and avoidance of said handshake will undoubtedly result in consternation, violence and inevitably, death. Chaos theory dictates that this handshake refusal inspired acrimony will trigger a chain of events ultimately leading to the breakdown of society followed closely by the destruction of the planet through some kind of huge explosion. This will leave us all clinging to small chunks of our former planet, drifting past each other in the vast emptiness of space with arms outstretched trying desperately to shake each others hands for the smidgeon of comfort afforded in the slightest piece of human contact. Then returning to solitude for an eternity of contemplation of how we let this happen. Or at least you could be forgiven for believing that this will be the course of events given the media storm that inevitably surrounds these things.

This week’s HANDSHAKE GATE is brought to you once again by that loveable rogue John Terry. It seems that people often have a problem with shaking Mr. Terry’s hand, perhaps he is a cheeky prankster who wears one of those handshake buzzer-ring-things as a hilarious jape…oh no, wait, I just checked my notes and it says here that he is the biggest cunt in football, must find a way to remember that, perhaps by mentioning it in every blog post I make. Well, this time the problem is to do with Anton Ferdinand and Terry’s alleged racism towards him, charges that Terry strongly denies. He is so confident in his innocence that he instructed his lawyers to delay his trial until after the European championships, thus avoiding any potential suspensions from the FA until after what will probably be his last tournament for England.

The excellent Arseblog, as well as sharing an appropriate opinion on England’s former captain is spot on about this handshake thing, arguing that the whole pointless exercise should be stopped. I also don’t think anybody should be forced to shake another person (or John Terry) by the hand. This enforced sportsmanship ritual defeats the entire object. Despite what FA chief Richard Scudamore may think being told you have to shake somebody’s hand does not make you respect them, take away the legislation and you avoid these little media storms with the happy side effect that when handshakes happen they will be sincere expressions of respect rather than an affected obligation.

Anyway, there is actually some football being played this weekend to keep you interested in the long periods between hands being shaken or left to dangle outrageously from the ends of arms. There are big games for top and bottom so in the age old Match of the Day tradition I will start with the top. Utd. Vs. City for those of you living in your own little bubble is Monday night so more on that on Monday morning. To be honest to avoid the hype for this one your personal bubble would have to be hermetically sealed.
Even if you took a laptop in with you, chances are lack of oxygen will have made you very blue and very dead by now and so you have strayed out of my target audience. I’m sorry I just don’t cater to dead people, unless you are Undead and inclined to comment, in which case welcome! Take a hunk of my thigh and make yourself comfortable….

…I digress, this is a problem I have, apologies.

Stoke vs. Arsenal Next down in the table are Arsenal with what is on paper the trickiest game in their run in. Stoke ostensibly have nothing to play for but these are 2 teams with buckets of bad blood between them, conflicting styles, Aaron Ramsey’s leg and the ensuing public fall out of Pulis and Wenger have seen to that. Unless Newcastle can beat Man City or Chelsea in the run in I think that Arsenal need 6 points from their last 3 games to secure 3rd spot and so a point in a ground on which they have previously struggled would not be a disaster.
Tottenham vs. Blackburn- 2 similar teams in many ways, both on a down slope in terms of form but both still with much to play for (Champions league qualification and premiership survival respectively). Midweek results for Chelsea and Bolton may prove disheartening for both teams as they could impact on their targets, a real test of mettle for potential future England manager Redknapp and the much derided Kean as they try to motivate their sides. Expect a scrappy match as both teams fight to turn their seasons around.
Wigan vs. Newcastle 2 form teams of late and 2 teams still with plenty to play for, this could be the game of the weekend. If Wigan had played like they have in recent games all season then they would be much further up the table. They have the same problem every year, Martinez finally gets the team playing according to his philosophy, they pull themselves out of the relegation zone, then the season ends, they sell all of their best players and are back to square one. Newcastle have been stupendous for the last couple of games and will be hoping for Champions league football to keep their squad together.
Chelsea vs. QPR- I guess I made my feelings on Chelsea’s recent revival clear on Wednesday (see below) but time will tell if that Barcelona game proves to be indicative of the rest of their season. Di Matteo’s men haven’t shown any attacking fluency for some time, deadly finishing yes, but QPR will not be as open as Barcelona were on Tuesday so chances may be at a premium for tired legs. Also, unless Cahill has recovered from his hamstring injury they will be forced to play drained midweek heroes Ivanovic, Bosingwa and (admittedly slightly rested, not hero) Terry in defence. The hoops are fighting for their lives and landing some punches while they are at it as good results against Arsenal, Tottenham and Swansea have shown in recent weeks. If they can find a way to keep 11 men on the pitch I expect them to cause Chelsea difficulties.
West Brom vs. Aston Villa Villa are on the slide. Remember a few seasons back when Villa played exciting football on the counter attack? They’ve lost a lot of good players and one good manager since then. The whole season they offered nothing in terms of entertainment or even just the result grinding obduracy of Mcleish’s time at Birmingham. West Brom, again, seem to have nothing to play for but the enduring misery of a local rival could be motivation enough to beat a team bereft of ideas.
Sunderland vs. Bolton Sunderland have been pretty awful since their survival was secured. Bolton showed something in midweek to suggest they may battle their way out of this season intact after all. An away win as boring as this paragraph I suspect.

Those are the significant games, also playing are Everton vs Fulham, Swansea vs. Wolves and Norwich vs. Liverpool, all teams mired in mid table purgatory for the rest of the season. The fact I can’t be bothered to write up anything on these games should serve as an implicit assertion that nothing interesting will happen in the dead rubber games between these teams with one eye on their summer holidays. Come on Premier League, defy my italicised clichés. Prove me wrong Premier League. PROVE ME WRONG.

Posted by Football Bubble at 00:30

Go on...express yourself, what is it you want to say?